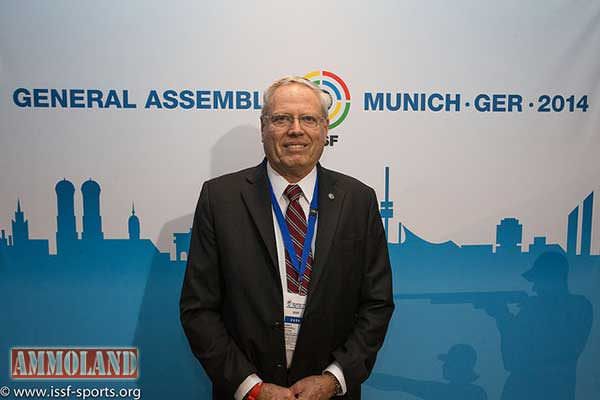 USA –-(Ammoland.com)- Seventeen years after becoming USA Shooting’s Chief Executive Officer/Executive Director and after more than 57 years in the sport, Robert Mitchell shut off the lights to his office for the final time Wednesday having effectively taken his last shot with USA Shooting. Mitchell announced he was retiring back in early June and upon completion of the Olympic Games, his tenure as USA Shooting’s Chief Executive Officer and Executive Director has come to a close.

He was honored by members of the USA Shooting Board of Directors, staff, United States Olympic Committee (USOC), friends and family during a reception Monday night in Colorado Springs.

“I have been privileged to have served as the President for two separate full terms, thus allowing me the opportunity to work very closely with Bob on almost a daily basis,” said Lally, who met Mitchell in 1993 when he was asked to serve as Team Physician before sitting on the Board of Directors beginning in 1998. “At one of the first Board meetings, I asked what the budget was and the response was ‘what budget?’ Bob stepped up shortly after that and took the reins. I know that he has treated every penny that USA Shooting has as if it were his own, and thru his commitment and attention to detail, we went from being a nearly bankrupt NGB to one of the most financially solvent in the Olympic Movement.”

“Every four years, right after the Games, we would meet for a weekend and review the past four years results and plan for the next four years,” Lally added. “This became one of our pillars of strength and success and his leadership in organizing and running the retreat proved invaluable. He has received criticism over the years about this or that, but I can assure anyone reading this that any decision involving an athlete during our tenure together was never taken lightly or treated frivolously. The fact remains, he was the right leader for USA Shooting at the time and continued to be so until his retirement.”

During the ceremony, the USA Shooting staff announced that they were renaming the Rocky Mountain Rifle Championship in his honor. The match originated under Mitchell back in 1986 when he was National Rifle Coach. From now on the event, which will take place February 9-12 in 2017, will be known as The Robert Mitchell Rifle Championship. That match continually attracts top-ranked national and international talent and serves as a good barometer for a level of readiness prior to the World Cup season.

Additionally, Mitchell was presented with several different local golf packages to enjoy during his retirement.

Mitchell, 69, began shooting at the age of 12, and started to compete on the international level in 1971. He was a member of the U.S. Army Marksmanship Unit (USAMU) Shooting Team and a volunteer Assistant National Coach to Bill Krilling since the first active U.S. Shooting Team was started in 1979. He was then hired as the National Coach in 1986 before becoming the Director of Operations in 1996. He officially became USA Shooting Executive Director/CEO on August 28, 1999. He was the National Rifle Coach during three Olympic Games including Seoul 1988, Barcelona 1992 and Atlanta 1996 and helped lead Bob Foth and Launi Meili to medals in 1992.

Since his tenure as CEO, USA Shooting Team athletes have won 19 Olympic medals including nine gold, four silver and six bronze over the span of five Olympic Games, fifth most among all U.S. sports during that time. During that same span, the U.S. has racked up 28 World Championship medals, including 13 World Champions, and 284 overall World Cup medals.

It hasn’t always been easy. Four years removed from USA Shooting becoming the recognized National Governing Body for Olympic-style shooting in the U.S., Mitchell took over at a time when the operating budget was less than $3 million and the organization had difficulty meeting its financial obligations. The staff was composed of nine full-time employees at the time. USA Shooting now operates on a $5.5 million budget with an additional $400,000 in direct athlete support provided by the U.S. Olympic Committee. With expanded operations, the staff has grown to 17 full-time staff members.

Among NGB Executive Directors, his years of service rank him second alongside USA Hockey’s Dave Ogrean, USA Baseball’s Paul Seiler and USA Badminton’s Dan Cloppas and behind only that of Chuck Wielgus of USA Swimming who has held his position for the past 18 years.

Mitchell has also helped grow USA Shooting’s international footprint as the organization has hosted 16 International Shooting Sport Federation (ISSF) World Cups since 1998. He has served on the ISSF Administrative Council since 2002 and was elected to a four-year term on the ISSF Executive Committee in 2006 and 2014. Mitchell has also served in the capacity of Technical Delegate (TD) for various World Cups and most recently was the TD for the 2015 Pan American Games. Presently, there are six different USA Shooting representatives as part of ISSF leadership positions including Vice President Anderson.

“When I joined the US Shooting Team in 1986, I never gave thought or dreamed of a 30-year career in Olympic-style shooting,” Mitchell said. “It has been a most rewarding journey working with athletes, staff, the USOC, ISSF, sponsors and supporters in helping grow and guide our organization. I thank all who have contributed in many ways to the growth and success of USA Shooting.”

Bob graduated from the University of Toledo in 1970 with a BBA in Finance. He plans to remain active in the sport with regard to his ISSF commitments at least through 2018. He and his wife, Sue, reside in Centennial, Colorado.

Dave Johnson, previously the National Rifle Coach and Director of Operations, has been named Interim Chief Executive Officer. USA Shooting will seat a new Board of Directors in January 2017.