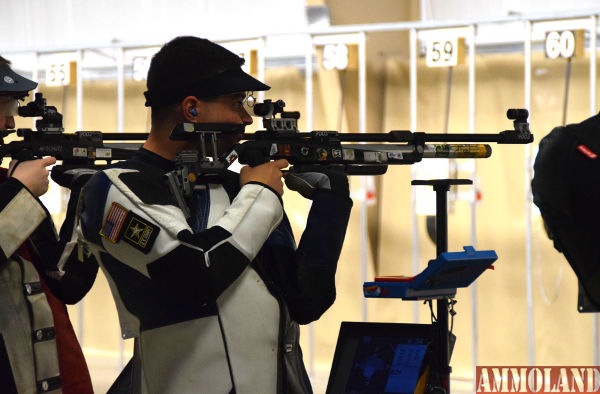 Rio, Brazil –-(Ammoland.com)- Eley reports in just a few days sports enthusiasts and Olympic fans will be glued to NBC affiliates while they cheer on the 555 athletes representing the United States of America trying to bring home a gold medal.

Of those 555 athletes 20 will be competing for medals in the 15 different Olympic shooting events spanning rifle, pistol and shotgun. Exactly half of the shooting Olympians representing Team USA will be competing with ELEY .22LR ammunition.

The shooting events kick off the Games with Women’s Air Rifle being the first medal awarded at the Olympics on Saturday, August 6. There will be shooting action the first nine days of the Olympics with 2-time Olympian Sarah Scherer (Woburn, MA) and the youngest USA Shooting athlete Virginia Thrasher (Springfield, VA) up first in Women’s Air Rifle. These two women will also shoot for a medal in the Women’s 3 Position event. Thrasher surprised everyone when she won both the air rifle and smallbore event at the NCAA Championships as a freshman with West Virginia University. Scherer made the team after battling a back injury that came on two years ago.

The Men’s Rifle Team showcases some veterans and some newcomers. Matt Emmons (Browns Mills, NJ) is the most decorated US Olympic rifle athlete with three Olympic medals and 44 World Cup medals. Emmons will be competing for his second 3 Position medal in Rio being one of the favorites currently ranked number one in the world. Michael McPhail (Darlington, WI) also brings experience to the rifle team competing in his second Olympic Games and is an eight-time World Cup medalist in Men’s Prone. McPhail, a member of the United States Army Marksmanship Unit, will be looking to make the final and bring home a medal after he finished ninth in the 2012 Olympic Games. Newcomers David Higgins (San Clemente, CA), Lucas Kozeniesky (Fairfax, VA) and Dan Lowe (Olympia, WA) round off the Men’s Rifle Team. Higgins, a 2016 Air Force Academy graduate, joins McPhail in the Men’s Prone event. Kozeniesky, an NCAA All-American with North Carolina University is joined by Lowe, a member of the United States Army Marksmanship Unit in the Men’s Air Rifle event. Lowe will also join Emmons in competing in the 3 Position event.

The Women’s Pistol Team consists of three-time Olympian Enkelejda Shehaj (Naples, FL) who will be competing in Women’s 25m Sport Pistol and 10m Air Pistol. Shehaj competed for Albania in her first two Olympic Games in 1992 and 1996, but 20 years later as a United States citizen she will represent Team USA in both women’s pistol events. Along side Shehaj in Women’s Air Pistol will be teammate Lydia Peterson (Kansas City, KS) who won a quota place at the 2015 Munich World Cup when she finished fifth in her first WC Final.

Men’s 50m Pistol and 10m Pistol showcases young athletes Will Brown (Twin Falls, ID) and Beijing native Jay Shi (Phoenix, AZ). Shooting is a family event in the Brown household where the entire family can be found on the firing line at a pistol match. Brown brings some experience to the Games as he has made seven World Cup finals and won two medals. Shi moved to the United States for proper medical care for an injury he suffered from at age 10 to his right eye. The injury forces Shi to shoot with his left eye, even though he shoots right handed.

The Men’s 25m Rapid Fire event is loaded with experience with three-time Olympian Keith Sanderson (Colorado Springs, CO) and six-time Olympian Emil Milev (Temple Terrace, FL). Sanderson, a new father, is a nine-time World Cup medalist and finished as high as fifth in the Olympic Games. Milev, a 1996 Olympic Silver medalist, competed for his native country, Bulgaria, before moving to the United States in 2004. Milev is a physical education teacher and is a member of the shooting academy “Pardini USA.”

ELEY has been a proud sponsor of the USA Shooting Team for the past four Olympiads and is proud to continue that sponsorship through Rio. ELEY is the most accurate .22LR round on the market and has helped athletes win more Olympic and International medals than all other .22LR ammunition manufacturers combined.

All shooting events can be viewed live at NBCOlympics.com at the following schedule: