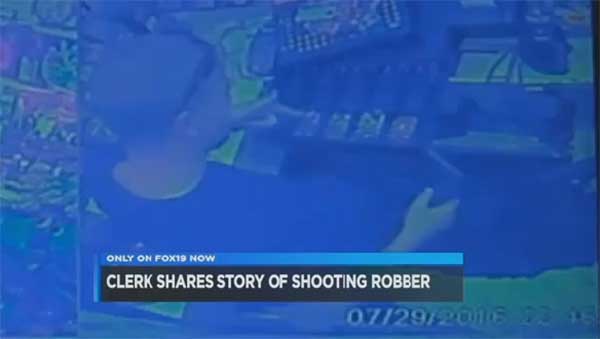 The 18 year old suspect had attempted to rob the Harrison Food Mart on Trevor Avenue, around 11 p.m. a week prior.

“He walked in and I didn’t see him till he had a gun on my chest and holding my arm down,” said the clerk. The suspect was wearing a gray hoodie, latex surgical gloves, a mask and he held the clerk at gunpoint.

He ordered the clerk to empty the cash register. The clerk did that but was unable to open a store safe as ordered. At that point he drew a concealed handgun from his waistband and shot the armed robber four times.

After the shots were fired, the suspect fled but was taken into custody nearby. He died several days later at a Cincinnati hospital.

Prosecutors have now determined the convenience store clerk was justified in fatally shooting a teenage robbery suspect and he won’t be charged criminally.

“I didn’t wake up thinking I was going to kill a guy,” said the clerk.

The Hamilton County Prosecutor also commented that the robber’s behavior was “totally out of character.” His family has said he was an athlete with no history of trouble.

A good shooting, it seems the clerk did all he could to avoid having to shoot this guy.

The prosecutors “out of character” comment could certainly encourage a stupid lawsuit against the shooter.

Sometimes one wonders why things like this are said that simply extend the misery of those family members who lost someone, DUMB!