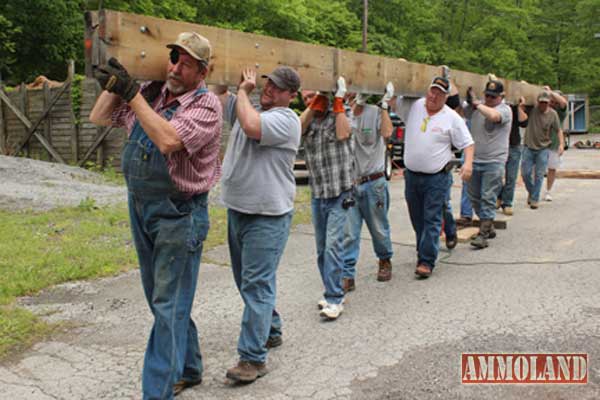 USA – -(Ammoland.com)- This year’s presidential campaign has revealed much about the state of the union in 2016, but surely one of the most important revelations has been the existence of a stagnant economy with declining real wages and a great hollowing out of the Middle Class as millions of Americans are dropping out of the labor force.

At the heart of the problem is a real gap between the skills many Americans have and the skills they need to get a good job. According to the Department of Labor, there are nearly 6 million job openings in the U.S. Frequently, these positions are unfilled because businesses cannot find employees with the skills they need.

While graduates of top universities may have little trouble finding the highest-paying jobs, millions of other students are getting a far more questionable bargain from our current system of higher education.

As Mike Rowe, host of Dirty Jobs, has described the challenge, “we are lending money that ostensibly we don’t have to kids who really have no hope of paying it back in order to train them for jobs that clearly don’t exist.”

Americans who are past the typical age of an undergraduate student are in an even worse position. Traditional universities and community colleges focus intensely on academics over practical knowledge, which often makes them a poor choice for people who need to learn new skills at middle age.

Our political leaders are finally catching on to this reality.

The Republican Party platform called for “new systems of learning to compete with traditional four-year schools,” including “technical institutions, online universities, lifelong learning, and work-based learning in the private sector.” Public policy, the platform said, “should recognize that a four-year degree from a brick-and-mortar institution is not the only path toward a prosperous and fulfilling career.”

Hillary Clinton echoed the sentiment in her acceptance speech at the Democratic National Convention last month, acknowledging “something we don’t say often enough: College is crucial, but a four-year degree should not be the only path to a good job.” We need, she said, “to help more people learn a skill or practice a trade and make a good living doing it.”

Those are excellent words from the Democratic nominee for president. Unfortunately, her party’s platform explicitly attacks the programs and businesses that are necessary to make her words a reality.

The Democratic Party platform calls for special regulations targeting private sector colleges, universities and career education programs–and many of these appear designed to put the career-focused schools out of business. For instance, the Democratic platform lauds the Obama administration’s Gainful Employment Rule, which requires only private-sector programs to prove that graduates, on average, earn enough money so that their loan payments are less than 8 percent of their monthly incomes.

They don’t define programs by academic quality, simply by the debt-to-earnings ratio in year 3 of one’s chosen career. What does that mean? If you are poor, and pursue an occupation with lower starting wages, your program soon will not exist!

The administration now supports a newly proposed “defense-to-repayment” regulation, which would require all schools to set aside funds to forgive student loan debts for those students who can claim that their schools made misrepresentations to them even if no harm resulted and even if no intent to defraud could be proven. The proposed regulation would be a dramatic expansion of the legal arguments trial lawyers could wield on behalf of their student clients to not pay back their student loans.

We all support students who are academically defrauded being able to seek appropriate loan forgiveness. But a regulation that imposes penalties before conviction and encourages class action law suits by trial lawyers would eliminate the good schools providing good programs.

Even the Washington Post editorial board has labeled this proposed regulation an “overreach.”

The regulation would also impose a significant cost on taxpayers. By its own estimate, the Department of Education believes the implementation of the proposed regulation could cost the taxpayer $43 billion over the next ten years in the form of student debt that would go uncollected and be left to the taxpayer to foot the bill.

Both Republicans and Democrats should be for accountability in higher education and reasonable regulations, including even some version of the gainful employment and defense-to-repayment rules. At the same time, accountability standards must apply to everybody equally–public and nonprofit universities, community colleges, and private-sector schools alike.

Any unequal application of federal rules in higher education should be taken as a clear sign that the regulations are not principled consumer protection measures. Instead, unequal application of accountability rules is a sure sign that one sector of higher education is being punished, and another benefited, strictly on ideological grounds. This double standard in enforcement of the law is inherently unfair and should face bipartisan rejection by Congress.

The Obama administration should realize that when they punish good, law abiding institutions that focus on skills training and career education, they are really punishing the forgotten middle class–the very people that the career schools are serving and that traditional schools aren’t serving. They are also punishing the very people who are in the best position to close the skills gap and help rebuild the Middle Class in this country one good job at a time.

In light of the historic gap between our comfortable elites and the rest of the country, we urgently need a renewed, bipartisan commitment to improving opportunity for all Americans. That will require new thinking about how we train people for careers that are available now, how we accredit the institutions that are helping students learn the skills they need, and how we hold schools equally accountable for producing results.

With her fine words about skills education in her acceptance speech last week, Hillary Clinton has the opportunity to lead her party in a new direction and away from an ideologically driven assault on career education.

Donald Trump and the Republican majorities in Congress have already signaled their clear commitment to career education in the Republican party platform. Congress has a rare bipartisan opportunity before it to help rebuild the Middle Class by closing the skills gap. It only has to make sure that new costly and punitive regulations out of the Department of Education are revised so that they don’t destroy the very schools that will help make this happen.

If not, the real losers are those students, often adults, with only one road to the middle class – through a career program providing real skills leading to real jobs, real income and real place in America’s middle class.

P.S. Callista’s and my new documentary film, Divine Mercy: The Canonization of John Paul II is now available at the Gingrich Productions store. The film celebrates one of the most influential leaders of the 20th century and is a vivid reminder of the holy and heroic life of Saint John Paul II, who changed the course of history. Click here to watch the trailer and order now>>

Newt Gingrich is well-known as the architect of the “Contract with America” that led the Republican Party to victory in 1994 by capturing the majority in the U.S. House of Representatives for the first time in forty years. After he was elected Speaker, he disrupted the status quo by moving power out of Washington and back to the American people.

Gingrich Productions is a performance and production company featuring the work of Newt Gingrich and Callista Gingrich. Visit : http://www.gingrichproductions.com/

This post Rebuilding the Middle Class One Good Job at a Time appeared first on AmmoLand.com Shooting Sports News .