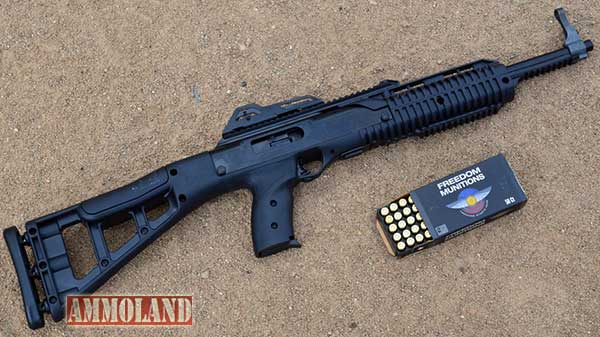 By Mike Searson
Gun writer Mike Searson tries to wrap his brain around the reason behind a .380 caliber rifle in this Hi Point Carbine review.

USA –  -(Ammoland.com)- It’s no secret, we are a fan of pistol caliber carbines.

Our tastes run a bit more to submachine guns like our full auto IMI Uzi or our lever guns chambered in magnum handgun calibers, but every now and then we want to try out something different.

That is, until we heard of Hi-Point’s 380 ACP Carbine: 389TS, to that enter this Hi Point carbine review.

Yes, Hi-Point is currently producing a carbine chambered in 380 ACP, or 9mm Kurz, or 9mm Short or whatever other name you want to call that pipsqueak of a mouse gun round.

The caliber perplexed us. That round is intended for small concealable pistols and people who live in countries where “Military calibers” are banned to civilians. The closest thing we could think of ever seeing that resembled a 380 long gun was the old Ingram M-11, but that was really a machine pistol with a telescopic stock and its virtue was the 2mm reduction in case length from a 9mm gave it a cyclic rate of fire of over 1200 rpms.

MKS Supply, Hi-Point’s distributor, explained to us that the idea came from their customer base. We asked them about the choice and the answer was plain:

“Over the last 4-5 years there have been millions of 380 ACP pistols sold. Many of which were a person’s first and only firearm. These shooters tend to have 1 caliber of ammo and it is 380 ACP. They are less inclined to buy another firearm of a different caliber, but they may buy a rifle that shoots the same ammo they already have.”

Add to the fact that Hi-Point is the only company making a carbine in this caliber and it starts to make a little more sense.

NOTE: Our good friends at Freedom Munitions sent us 250 rounds so we could give a good overview.

On the range we did not know what to expect. We have shot 380s from tiny pocket pistols to full size service pistols in this caliber and the M11 on full auto, but never from a carbine. Recoil and noise were on par with a subsonic 22 lr. That’s right, subsonic. There was nothing to this one at all.

You can get very accurate with this one quickly and we see some potential in it as a training aid for shooters who may be gun shy of a centerfire rifle round. Plus, it is straight-up fun to shoot.

Like their other carbines, this one has plenty of rail space if you wish to add lights, lasers, fore grips, etc. A small red dot could make this a fun plinker all day long.

Common magazines with their 380 ACP pistols are another thing that Hi-Point owners can celebrate about this little carbine.

The factory ghost ring sights are adjustable and very robust.

We had one mishap with ammunition on the range, but it was shooter error and had nothing to do with the ammunition or the rifle.

Beyond that it was utterly reliable and rest assured, Hi-Point has one of the best warranties in the industry. If something goes wrong, they will make it right.

As fun as this one is to shoot (and really, that is sometimes the only reason you need to buy any firearm!) we find its utility beyond the shooting range to be limited. Mostly because there is no real ballistic advantage to be gained by a rifle length 380 ACP and the ammunition is costly when compared to the larger 9mm.

The rails are the Weaver type and suspect there may be problems attaching certain accessories that are designed for Mil-Spec Picatinny systems. Removal of the factory rear sight does not look like a fun way to spend a Sunday afternoon, either. As simple as these rifles are, they are over engineered in some regards.

Pistol caliber carbines have been around since the invention of cartridge firearms. When Winchester produced lever-action rifles in 32-30, 38-40 and 44-40; Colt followed suit and offered those calibers in their revolvers. Contrary to popular belief, lever guns of the Old West were never offered in 45 Colt until the 1960s or so when the rim was redesigned on the round. Hi-Point is carrying on this tradition of the old time gun makers and it should pay off for them.

We are not a fan of this cartridge/firearm combination as an answer to any tactical question, but we do think it is a fun one to introduce new people to shooting. Again, if it is all you have, it’s better than having to throw rocks in a gun battle.

As to the subject of velocity we chronographed a few rounds through a 4.5” Beretta 84BB and the Hi-Point carbine. The 12 extra inches of barrel gave us an increase of about 120 to 140 fps. To be truthful we did not even expect that much. We have seen 9mm gain as much as 250 fps with certain loads when going from 4” to 16”, but 380 does not have much powder to begin with. Some of the hotter +P loads might prove interesting and we would be curious to see if the barrel length increases expansion of those rounds.

We think a threaded barrel would be a nice feature on this as the round has no supersonic crack when leaving the barrel and could make short work of varmints at close range.

If you like the thought of a 380 plinking rifle or are one of those people who imposes a limitation on themselves of only a handful of calibers to keep on hand, you will probably like this carbine. And did I mention the price? $297!!

Mike Searson’s career as a shooter began as a Marine Rifleman at age 17. He has worked in the firearms industry his entire adult life as a Gunsmith, Ballistician, Consultant, Salesman, Author and was first certified to teach firearms safety in 1989.

Mike has written over 2000 articles for a number of magazines, websites and newsletters including Blade, RECOIL, OFF-GRID, Tactical Officer, SWAT, Tactical World, Gun Digest, Examiner.com and the US Concealed Carry Association as well as AmmoLand Shooting Sports News.