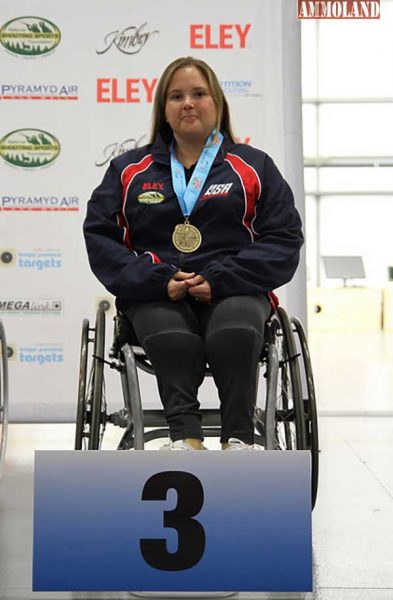 USA –-(Ammoland.com)- Though Tammy Delano (Rome, New York) was an alternate for the Wheelchair Curling Team for the 2010 Paralympic Games, it wasn’t until now that her Paralympic dream would be realized.

“It’s a great honor to represent the U.S. It’s something I never dreamed would happen,” Delano said. “For anything in my life, it’s probably the biggest thing I’ve ever accomplished. I could have never even imagined this happening to me.”

At the International Paralympic Committee (IPC) World Cup in Fort Benning, Georgia in November 2015, Delano would have her last two chances to qualify for the elusive Paralympic Games quota. In the R2 (Women’s 10m Air Rifle Standing SH1) event, she would take home the bronze medal with a loss in a shootoff (pictured), but more importantly, she was one shootoff shot away from winning a quota slot.

It wasn’t until the next day – when she didn’t even qualify for the Final – that she’d earn the redemption she was hoping for – securing a quota slot in the R3 (Mixed 10m Air Rifle Prone SH1) event.

“I just wish my dad was here to see this,” she said, starting to cry as her name was posted on the wall among the quota winners. “That’s the best I’ve ever shot. Two personal bests, a medal and a quota all in one match? Sounds pretty good to me.”

Delano battled health challenges, travel and training, as well as the recent loss of her father to earn her slot on the Team and hopes that all that strength gained from these experiences has prepared her for the next step on her journey – a Paralympic medal.

“It was pretty rough trying to overcome some of the health issues and things I’ve needed to deal with,” Delano, 43, said. “There were quite a few times I didn’t think I’d be able to do it. The past couple years have been kind of a test of my strength and I realized I’m a lot tougher than I thought I could be.”