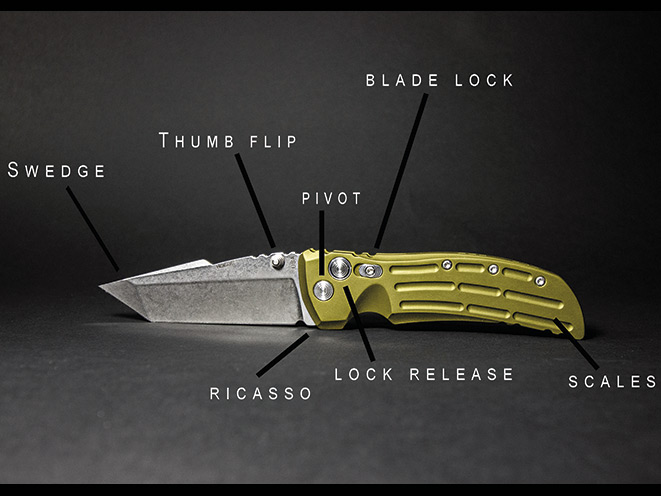 Folding knives for daily carry have been around for over 2,000 years. One of the oldest discovered folding knives dates back to 500-600 B.C. It was unearthed in Hallstatt, Austria, and it features a single blade with a bone handle. The evolution to the folding knife that we more easily recognize began in the 1600s with the development of the slip-joint knife. These knives featured a backspring that kept them in the open position. This style would become the basis for many pocketknives made today. Fast-forward over 400 years and the simple, common pocket knife has become anything but simple.

The last decade has seen enormous growth in the tactical knife industry, and it shows no sign of slowing down. One of the biggest reasons for this growth is the popularity of these knives as tools for self-defense. In environments where guns are prohibited, edged weapons stand front and center as effective self-defense tools. A knife can be an exceptionally effective weapon, but, as with any weapon, there are techniques that will allow you to be more effective.

Fighting with a folder is unlike most other self-defense scenarios. It is a violent and generally bloody confrontation that can have lethal consequences. It is important to know what you are doing. Make no mistake, this article should not be seen as the only training you will need in order to wield a knife correctly. My goal is to simply provide some guidelines. If you are serious about carrying a knife for protection, you should seek professional instruction.

The use of a knife should be applied in lethal-force situations only and you should be committed to winning that confrontation. Knife laws vary around the country and it is your responsibility to know and obey your local laws.

Long before we can talk about specific physical motions, we need to talk about the mind. How you perceive a violent confrontation needs to be reviewed and proofed. The most important thing to realize is that, if you use a knife, it is not a fight. The term “fight” in the Western mind generally implies that there will be some give and take. You will strike and then you stay squared up as the opponent strikes back, much like boxing or MMA. This can have lethal consequences. Any fight for personal preservation should be based in utter violence of action. There is nothing fair or equal about fighting with a folder.

Any sharp object can be used to defend yourself if the situation is dire. However, there are better weapons for the job. A folder specifically intended for personal defense should be well balanced, have a sturdy blade, a solid grip and a high-quality locking mechanism. The blade should be carbon steel and be kept razor sharp. It should be effective at both slashing and stabbing.

Choose your knife carefully, as a failure in any of these features can cost you your life. As a side note, your defensive carry knife is just that. It should not be seen as a utility knife. Keep it clean, lubricated and sharp. One very important thing to remember is that fit matters. There are multiple companies producing great knives, and you should handle as many as possible to see which one fits your hands the best.

Before we can use a knife to defend ourselves, we need to get it out of our pocket and opened. As with handguns, there is a draw you can learn to quickly and efficiently draw your folded knife. With your strong-side hand, reach down and slide your thumb into your pocket. Slide your thumb down your pocket until you reach your knife. This allows for solid indexing of the knife clipped in your pocket. Now, with a pinching motion, draw the knife up and out of your pocket. As with a handgun, it is important to practice your knife draw.

Opening the knife will depend on a few things. First, the type of knife you have and how you carry it. Assisted-opening knives are very popular and are generally permitted where auto openers are not. A majority of knives are configured tip-down, so we will focus on that. As you draw your knife, place your fingers along the clip and your thumb on the drive device. In one smooth motion, drive your thumb up as you snap your wrist downward. These opposing motions will allow you to quickly open the knife, but they can take extensive practice to master.

As with so many things surrounding knives, there are multiple grips you can use. In that this is a fight for your life, however, we will focus on just two. First up is the hammer grip. For this grip the knife is held in your hand just as you would a hammer. This is a very common grip and it will feel very natural. It is important to have a firm grip on the knife. Letting it hang loose in your hand at any point could result in it being dropped or flipped out of position when you strike.

The other grip that works well is the icepick grip. This version has the tip of the blade oriented down and is primarily used in a stabbing motion. As with the hammer grip, you must keep positive control at all times. Both grips have their pros and cons. This is the perfect opportunity to once again suggest professional training. You will need to learn which grip fits you best and ultimately be able to transition from one grip to the other if the situation dictates.

“The hope is that nobody will ever be pressed into having to draw a knife for self-defense. This is simply not a reality in our world, however.”

If the worst happens and you need to draw your knife, there are some techniques that can help you prevail. You should keep your knife angled towards the attacker at all times. This is important because it keeps the blade between you and the adversary. This technique also allows you to keep the most distance from the threat. It is best to avoid close quarters unless you are superbly skilled at knife fighting. When the moment comes that you must strike, you are encouraged to stab. Use full, quick thrusts in and then pull back and prepare to follow up. This is where civility and gentleness leave the room.

One stab will rarely get the job done. Plan on a flurry of fast and hard stabs into the assailant. You must overwhelm them and place them into a defensive mindset. Stay aware and be ready to break away from them as quickly as possible. It is essential to remember that our goal in this fight is not to kill the assailant, but to stop them and allow yourself the opportunity to escape. That philosophy is not intended as a kinder and gentler notion, but rather a tactical principle. The longer you engage a subject, the higher the probability that you will be injured. We must also assume that they will have an accomplice with them. Strike with the intent of damaging them to the point that you can escape.

Slashing can be effective as well, but it will not result in as much initial internal damage as stabbing. If you slash, use full, controlled strokes against the subject. Keep a firm grip as the blade makes contact and lead as much as possible with the tip of the blade. This is a similar technique used by swordsmen. As a mental tool, imagine that you are flicking a cherry off of the tip of your knife. This will help you accelerate the tip and, in turn, get deeper cuts. With extremely sharp knives, people may not even know they have been cut. As with the stab, it is important to plan on an intense attack.

The hope is that nobody will ever be pressed into having to draw a knife for self-defense. This is simply not a reality in our world, however. Understand this and be prepared to deal with the dangers that surround us. Expect your attacker to be a dedicated adversary that will not run away once a knife is produced. By expecting and preparing for the worst, your chances of survival improve exponentially. Defending yourself with a knife is a messy and dangerous business. But if you are unable to carry a firearm and are serious about personal protection, it is a business you should be in.