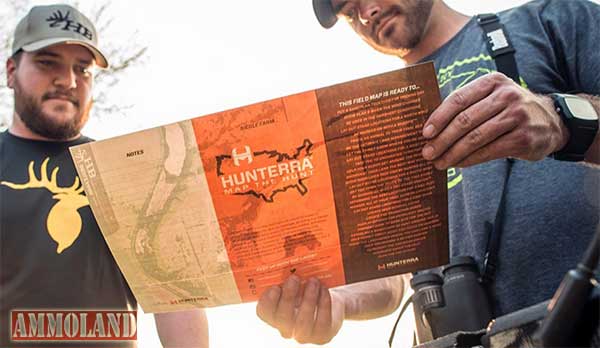 Rochester, NY (www.Ammoland.com) Understanding the relationship whitetails have with the land is paramount to having a successful hunt. Maps are a long valued piece of any hunter and landmanager’s arsenal. Often sharing the split duties of hunter and managers, many have spent hours pouring over both aerial and topographical maps, pressing them for the secrets only they possess.

With a myriad of map applications available via Apps and on Google, one map company takes the game to the next level by providing an experience and a valuable tool in the form of a physical map. Hunterra Maps give hunters the detailed look from above they need to close the distance on their target whitetails.

Ben Harshyne, founder of Hunterra Maps, was a government contractor who graduated with a degree in GIS and took a special interest in cartography and imagery. His first job in Washington D.C. was with the National Counter Terrorism Center where he became a lead cartographer for his unit. Building maps strengthened his sense of patriotism as he says he knew what he built was helping our troops on the ground all over the world. This sense of pride in his work is evident with each Hunterra map sent to customers.

As a dedicated whitetail hunter, the urban scene of Washington may not be the first place you would have thought of find Harshyne. “While building maps and living in D.C., I made a map for my father of our home farm in Pennsylvania as a gift. Our home farm is a heavily timbered piece and with basic online imaging you just could not see the details one needs in order to pinpoint strategic stand locations and to build a greater land management strategy.” The map he built for his father was shown to friends in the area. Soon, Harshyne had orders trickling in from hunters. This was the beginning of turning a hobby into a job and called the business, Hunterra.

“While it was a bit slow at the beginning, the ball really began rolling when I hunted with Aaron Milliken, who now works at Whitetail Properties, in Illinois. The Midwest, no secret, is the big buck capitol and is also the epicenter for whitetail management and land sales. I began making maps for the Whitetail Properties crew, which they would give to the buyers upon completing a land deal.” The Whitetail Properties crew loved the maps and soon wanted to include them in their TV show segments. “This TV exposure was what we needed and orders began to flow regularly.” Other TV shows, industry professionals, adventure filmmakers, even professional athletes began asking Harshyne for maps to understand their properties better.

With a growing part-time business, Harshyne rearranged his Washington D.C. hours to 40 hours in essentially three days. For those of you playing the home game, that equals about 15 hours each day in succession. Not easy. “My wife had already jumped into the business full time to help keep the day-to-day operations going and at Christmas in 2013 we decided to take a chance and go full time with Hunterra. We had an Airstream camper we turned into a mobile hunting unit and headed to Iowa. By the summer of 2014 we had settled in Iowa City and made it Hunterra HQ.”

Hunterra gives hunters a service you cannot compare with others. Harshyne and his team use what they call “The Terrimage.” The Terrimage is a blend aerial imaging crossed with terrain shadowing. Harshyne and his team have the ability to add topographical lines to give you a clear 3D view of your property in much more detail even down to five feet in elevation change. “Terrimaging reveals all the key information for bowhunters in detail you cannot get elsewhere. We make it easy to identify saddles, funnels and hidden benches and give hunters the ability to make the most of their time in the field before the season as they prepare. You can now go afield with just one map and not have to cross examine an old topographical map with a blurry satellite photo.”

The maps Harshyne and his team create are of the highest quality as they are teamed up with printers who create tough and even magnetic materials. With multiple map sizes available Harshyne and his team take the time to talk with hunters to really hear about what they want out of their map. “Our largest map covered four counties and other maps fit right in your pack. We strive to create a fantastic personal experience. Everything is customizable and the common thread of hunting big whitetails makes helping other hunters easy.”

About:
Jason Reid balances passions for business, bowhunting and capturing outdoor stories through written and visual means. Follow him on Instagram to learn more.