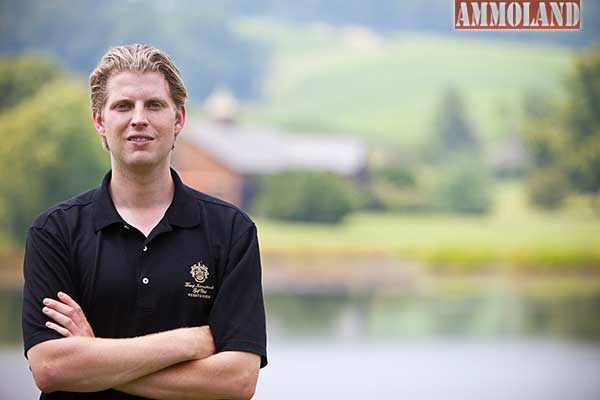 USA –-(Ammoland.com)- In celebration of the 20th Annual Sportsmen’s Alliance “Save Our Heritage” Rally, Eric Trump, avid hunter and son of Republican Presidential nominee Donald Trump, will speak at the event on Sept. 10 in Columbus, Ohio.

“For the past forty years the Sportsmen’s Alliance has protected hunters, anglers and trappers from attacks by the anti-hunting movement. Sportsmen have a long tradition of fighting for what they believe in, and so it should come as no surprise that they are politically involved when it comes to protecting our natural resources, access to public land, wildlife management practices and our second amendment rights,” said Sportsmen’s Alliance President and CEO, Evan Heusinkveld.

The “Save Our Heritage” Rally is a one-day rally of all things outdoors, which raises awareness and funds for the Sportsmen’s Alliance to protect and advance hunting, fishing and trapping nationwide. The event runs from 3-9:30 p.m. at the Villa Milano Banquet & Conference Center in Columbus, Ohio, and features a catered dinner, raffles, auctions and games for great prizes ranging from elk, wolf and deer hunts to African safaris and dozens of firearms.

Seating is strictly limited, and only a handful of tickets for remain available. Tickets cost only $50 and include dinner and drink tickets. No tickets will be sold at the door.

Appearances by political hopefuls is nothing new for the Sportsmen’s Alliance. In recent years, Sen. John McCain, Speaker Paul Ryan, Gov. John Kasich and others have addressed those attending the organization’s events.

Eric Trump, the middle son of Presidential hopeful Donald Trump, has been a lifelong hunter ever since his maternal grandfather introduced him and his older brother, Donald Trump, Jr., to it as children. The Trump brothers were attacked by the international animal-rights movement in 2012 when images of the two from an African safari circulated on social media.

About the Sportsmen’s Alliance:

The Sportsmen’s Alliance is a 501 (c) 4 organization that protects and defends America’s wildlife conservation programs and the pursuits – hunting, fishing and trapping – that generate the money to pay for them. Sportsmen’s Alliance Foundation is a 501 (c) 3 organization that supports the same mission through public education, legal defense and research. Its mission is accomplished through several distinct programs coordinated to provide the most complete defense capability possible. Stay connected to Sportsmen’s Alliance: Online, Facebook, Twitter and Instagram.