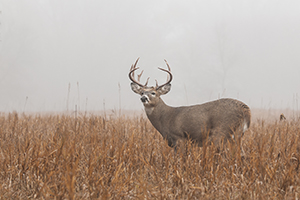 Springfield —  Like a good Alfred Hitchcock film, DNR’s deer program in recent years has been able to create suspense, build suspense and even hold suspense.

Unfortunately for hunters, the thing that’s missing is the most important part of any cliffhanger.

Less than two months before the start of the 2016-17 archery season, it appears no major changes are in the works. This, after talk of a bag limit for bowhunters was proposed last spring and a survey of hunters was conducted to gather feedback on the idea.

Currently, DNR regulations for deer still refer to the bag limit as, “One deer per legally authorized permit. No hunter, regardless of the quantity or type of permits in his or her possession, may harvest more than 2 antlered deer during a year, including the youth, archery, muzzleloader and firearms seasons.”

Meanwhile, season structure changes have been batted about in each of the past five off-seasons, but other than cuts to the number of counties eligible for the late-winter season, no changes have come.

Alterations before the 2015-16 season included a rule that allowed youth hunters to use unfilled youth season permits during first weekend of the regular firearms deer season. An additional rule change that came late  stopped sales of non-resident archery permits on Oct. 20.

Also, Kankakee and Livingston counties were opened for the first time to the CWD season.

The only thing on the books this year are a couple of administrative rule changes – but neither will affect the season structure.

An ongoing issue for the state’s deer hunters is the number of non-resident permits distributed each fall. According to DNR’s Permit Office, the agency issued 577,244 deer permits for all seasons in 2015-16, with 40,907 of them going to hunters who are not residents of Illinois.

That’s rounds out to about 7 percent non-resident hunters.

Archery deer permits accounted for 208,555 permits last year – 20,110 of them going to non-residents (9.6 percent). Archery actually experienced a decline last year, which has been blamed on a regulation change that stopped sales of the single antlerless-only archery permit to non-residents.

A total of 87,746 antlerless only permits were issued during the gun season with 8,256 going to hunters from other states (9.4 percent).

In 2015-16, Illinois’ late-winter antlerless-only season was open in 27 counties.

Hunters were able to participating in the season in 35 counties in 2014-15.

Deer-vehicle accident data (DVA) from the Illinois Department of Transportation plays a major role in deer decisions. DVA statistics from last year is expected to be released sometime this month.

DNR’s announcement about  the 2015-16 late-winter season framework came in September.

While no major changes are in store, some behind-the-scenes tweaks are progressing.

According to the Flinn Report – a rundown of actions by the General Assembly’s Joint Committee on Administrative Rules – DNR has proposed removing the 200-pound peak draw weight limit for crossbows and removing requirements for crossbows to have “broadhead points meeting certain specifications.”

In the report, DNR states that the rulemaking “will permit bowhunters to use field tips to hunt small game animals.”

This rule, of course, has little to do with the deer season and is meant to benefit crossbow hunters who wish to pursue game other than deer.

Two other changes moving through the Administrative Rules process have apparently already breezed through. One would allow archery equipment to be used during the firearms seasons, as long as the hunter is hunting on private property.

The second would bring back the unlimited non-resident antlerless-only deer permit – the same permit that was eliminated last year.

A wildlife scientist at the University of Washington and several colleagues argue in the journal Conservation Letters that if cougars returned to their historic range, they could prevent 155 human deaths and 21,400 human injuries, and save $2.3 billion, over the course of 30 years.

How? By killing deer.

The scientists put together statistics deer population growth, car accidents involving deer and how accidents increase with a growing deer population. They also gathered information on the number of deer a cougar might kill – about 259 over an average life span – and how much open, forested land was necessary for cougars to sustain a wild population (about 850 square miles).

Using a variety of mathematical models, the team came up with projections.

Adrian Treves at the University of Wisconsin said he was impressed with the analysis and thought it might underestimate the benefits of cougars.

The study has critics. The Chicago Tribune, for one, ran an editorial criticizing the suggestion that cougars were beneficial.

Posted in General news and tagged Alfred, good, Like, Springfield, —