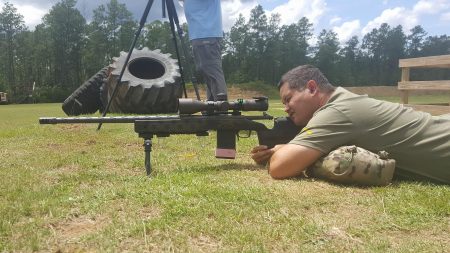 While serving in Iraq, in 2009, Caley survived a nighttime attack while servicing as an Infantry Platoon Leader in Iraq, sustaining a Traumatic Brain Injury, severe fractures in both feet and ankles, and a vestibular paresis. Because of his actions while in service, Caley was awarded a second Bronze Star and Purple Heart.

Currently participating in the Tactical division of the Precision Rifle Series, Caley is ranked 14th overall, and set to compete in the finale in January 2017.

“There is a very natural relationship between Joe, C&H Precision Weapons and what we represent,” stated C&H Precision Weapons, Owner, Buck Holly. “This partnership is both a pleasure and a tremendous honor for us to have Joe carrying and shooting a C&H rifle. Joe is honest and real, shares our same values and off the wall sense of humor and also has a relentless drive and spirit that resonates with everyone fortunate enough to meet him. He is as authentic and down to earth as you can get. We look forward to collaborating with him and in his representation of the C&H brand.”

C&H specializes in the manufacturing of the highest-quality hand-built precision rifles, working with each customers’ unique set of requirements for their particular application – whether for tactical teams, competitive shooting, long range hunting or light-weight rifles for extreme back country hunting trips.

Caley participated in the 2011 National Campaign Team, and started an adaptive golf program for warriors in the WTU and other Warriors in the State of Georgia. He is a member of the Veteran Golfers Association (VGA) and he serves as board member and as an officer within the group. Caley has participated in several shooting matches in Florida – including the Mammoth Sniper Challenge in Rock Castle, KY; Allegheney Sniper Challenge in Seneca Rocks, WV; Alabama Precision Rifle Challenge; and the Silencerco Quiet Riot in UT.

Caley will be running a custom .308 Win rifle made by the team at C&H Precision Weapons for the remainder of the 2016 Precision Rifle Series and for the 2017 season.

C&H Precision Weapons is a Veteran Owned Small Business located in southwest Florida, specializing in custom rifle builds, rifle repair and firearm upgrades. The company specializes in high-quality long guns, authentic M40A1’s, M40A3’s and M40A5’s along with custom designs based on each customer’s requirements.  Please contact us directly for an official quote by visiting www.chpws.com.