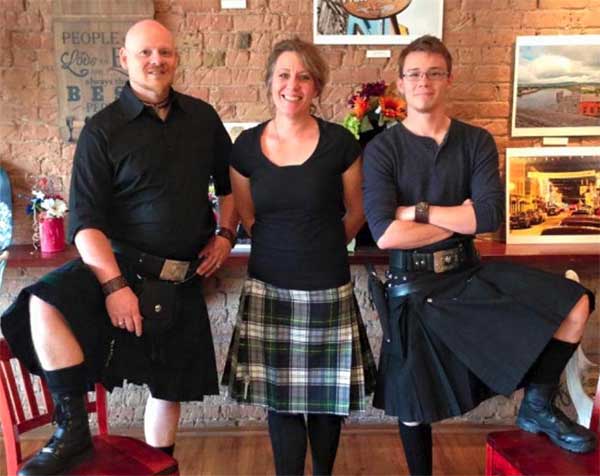 Arizona – -(Ammoland.com)-
Sea Bears is a successful restaurant serving sea food in Ogden, Utah.  They have made national news by their policy of open carry for restaurant employees and guests.  The policy brought them attention, and they have been successful enough to expand to larger quarters.  The family owned restaurant signed a lease for a new space at Union Station.  Union Station is home to four museums, including the John M. Browning Firearms Museum and the Utah Cowboy and Western Heritage Museum.  This appeared to be a good fit for an open carry themed restaurant.

The management of Union Station decided to put up signs banning open carry on August 19th, just a few days before Sea Bears was to open their restaurant there.  At the time, there was speculation that Union  Station might not have the authority to ban open carry at the venue. It appeared to be a public space owned by the City.  That was correct.

Union Station seems to have violated the law when it put up the signs.  The Ogden City Attorney, Gary Williams, read about the signs and went to investigate. From standard.net:

When Williams read about the Union Station ban in the Standard-Examiner, he decided he’d “better go look at the sign.” He said he then removed the signs out of fear they may run afoul of state firearms laws.

Williams stopped short of saying Sea Bears employees and customers can now open-carry in Union Station, saying “I don’t think I’m ready to comment on that.” But he did say Union Station and Ogden City aren’t regulating open-carry guns.

Utah, as with most states, has a state preemption law to prevent cities, counties, water districts, and any other political entities within the state from making their own laws regarding firearms.  If political sub-units of the states were allowed to do so, the right to bear arms would be extremely hard to exercise, as it would be difficult to know when a person was breaking the law or not.  Most County and City boundaries are not marked, and simply moving across a street could mean the difference between legally following the law and being subject to arrest.

The management of Union Station had no legal authority to infringe on the right to bear arms by banning open carry.

The Secretary of the Union Station Foundation, says that they are “not against the Second Amendment”.  He simply is against people exercising their right in a way the lets other people know that they are doing so.  From the Standard Examiner:

If people want to express their belief in the right to bear arms, Trentelman said he hopes they’ll at least be sensitive to the fact that some people are frightened by their open display.

“I don’t have any problem with concealed-carry,” he said. “If you’re going to do it, do it. It’s legal. But people who insist on open-carry, I don’t think it’s about protection — it’s about making a statement.”

Mr. Trentelman is mostly correct, I think.  Open carry is strong, symbolic, protected, political speech.  It is protected by both the First and Second Amendments of the Constitution.  Thus his *generous* and *tolerant* opinion that it would be alright if people exercise their rights, as long as it is in such a way that no one actually knows that they are doing so, is incredibly offensive and intolerant to anyone who thinks about what he is suggesting.

That people who are going to a gun museum would be scared of people actually carrying guns, seems a bit weird. In fact, people who legally carry guns are far more law abiding than the general population, and Utah is one of the safest states in the union.

That goes beyond offensive to irresponsible, and in this case, illegal.

City Attorney  Gary Williams is to be commended for his quick action.  The signs came down before anyone had to resort to lawyers and courts.

Both Union Station and Sea Bears benefited from the publicity.  It is likely that many visitors to Ogden will take a meal at Sea Bears, and visit the Museums.  Many Second Amendment supporters will be openly exercising their rights.

From numerous, consistent Internet polls, which measure intensity of support, it is clear that active supporters of open carry far exceed those who are offended by it. The numeric advantage of Second Amendment supporters is about  3-10 to 1.