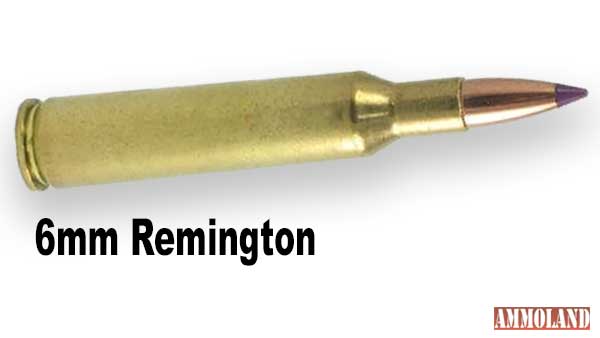 by Doug Gilmer
Author Doug Gilmer walks us through the history and usage of the 6mm Remington and related .243 ammunition cartridges.

Later, I topped it with a Tasco 3x-9x; the same scope still sits on the rifle today. It has been rugged and dependable and its zero never changes. The combo have accounted for a number of deer over the years, including my first. Why change?

The 243 is often considered a starter gun for youth and women. Its low recoil makes it ideal for smaller framed shooters to shoot well without developing a flinch. It has also helped cure shooters of flinching brought on by shooting larger, heavier recoil firearms. There will always be a debate as to whether or not the 243 is the ideal first deer rifle. But what no one can debate is that 6mm and the other .244/.243 cartridges are tried and true, solid performers.

In 1963 Remington renamed the .244 cartridge, calling it the 6mm Remington.

Over the years, hunters and shooters have had only a limited selection of .244 caliber cartridges. Not including the wildcat cartridges, the choices are primarily the 6mm Remington, the 243 Winchester, and the 240 Weatherby.

I am not forgetting the 243 Winchester Super Short Mag, though everyone else has, including Winchester. It was short lived and is pretty much out of serious contention today.

Todays 6mm Remington began life in 1955 as the 244. Remington chose to neck down the 257 Roberts (based on the 7×57 Mauser) and create something new and faster. Those 244 rifles performed best with lighter, 75-90 grain bullets in its slow twist barrel. The public, however, believed a 100 grain bullet was the minimum for deer sized game and it remained a varmint cartridge. In 1963, with popularity of the 244 being overshadowed by the 243 Winchester, Remington re-barreled its rifles to a faster 1:9 twist allowing efficient use of heavier, 100 grain bullets. It renamed the 244 the 6mm Remington.

It was too late, however. While the 6mm’s effectiveness has not diminished, its popularity has. Not even Remington chambers it today and ammunition is scarce. 6mm Remington offers little benefit over the 243 Winchester despite its slightly larger case capacity. Commercial loads only show about 100 fps or less over the 243. Both will launch lighter bullets at nearly 4000 fps and heavier 100 grain bullets at 3000 fps with a 2000+ pounds of muzzle energy. At 300 yards, the round is still delivering about 1200 foot pounds of energy and with a 200 yard zero, it only drops about seven inches.

Winchester’s 243, developed in 1953, overwhelmed Remington’s 6mm in sales and popularity. As a necked down 308, the 243 is an efficient cartridge, feeds exceptionally well in both bolt action and semi auto rifles, and is extremely accurate. It has gained tremendous popularity today in long range and sniper competitions using faster twist barrels and heavy caliber bullets. The .243 is a standard chambering by every rifle manufacturer, ammunition is easy to find, and typically inexpensive. It remains popular as a “youth and ladies” gun though this is an unfair moniker. The 243 kills game just as effectively in the hands of a well-practiced, full grown man as it does a youth or woman. It does this while generating only about 10-pounds of recoil in a 7-pound rifle.

Around 1968 Roy Weatherby, created the high performance 240 Weatherby Magnum. It can best be described as a 30-06 necked down to .244. Ammunition is only available from Weatherby but delivers a serious performance boost over the 6mm or 243 Winchester. This comes at the expense of more powder, blast, recoil, and a shorter barrel life however. The 240 Weatherby will deliver about 300 fps more in velocity, a corresponding increase in energy, and flatter trajectory with its 26” barrel. For Weatherby fans, there is no equal.

While I appreciate the speed and performance, if I need the extra boost in power the 240 provides for big game, I will move up in caliber and down in rifle size.

For starters, they are excellent varmint and predator cartridges. All cartirdges offer the flat trajectory and inherent accuracy needed for this task. They are also dual purpose guns, easily handling antelope and deer sized game. Many caribou and black bears have fallen to these rounds. I know hunters who have successfully used the gun on elk and I have personally watched moose taken with a 100 grain Remington Core-Lokt bullet.

Is it the best elk and moose cartridge? Definitely not. Will it work when in the hands of a skilled shooter who takes his or her time to make a good shot within reasonable range? It will.

These days my 243 goes with me to the farm loaded with Hornady Custom Lite Ammo with their 87 grain SST bullet. It is soft shooting, very accurate and works well on groundhogs and other pests. It was designed as a lighter recoiling deer hunting round and it works well for that as well. My rifle also shoots Hornady’s 95 grain SuperPerformance loads and Remington Core-Lokts equally well.

Today’s 6mm Remington‘s and related sister rounds have a great deal to offer. While the 243 leads in popularity, each is as effective as it is versatile. It’s not just a starter gun anymore.

Doug Gilmer is a law enforcement and military veteran with over 25 years of experience and assignments operating throughout the United States and around the world in a variety of investigative, protective, tactical and direct action roles. He is an avid outdoorsman who enjoys fly-fishing, hunting with a handgun, backcountry adventures, and volunteering with various outdoor themed wounded warrior events. He has been a frequent contributor to outdoor media for for several years with numerous articles and photos published in a number of media channels. He is a member of the Professional Outdoor Media Association as well as a former board member and executive officer.