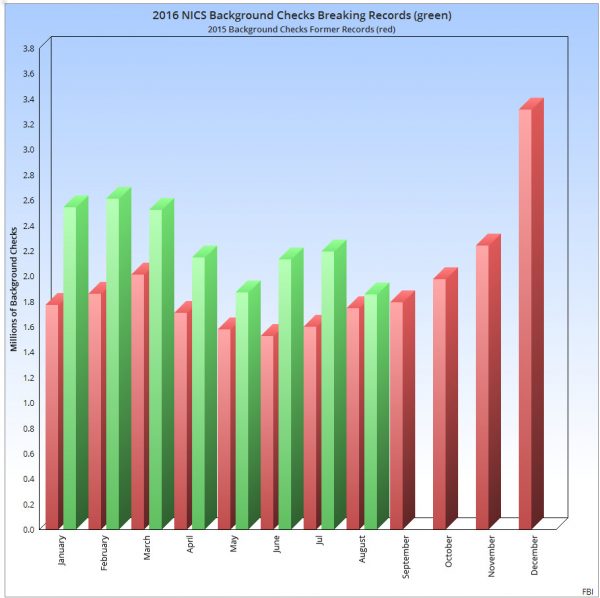 Arizona – -(Ammoland.com)- In August, 2016 continued on its record breaking pace to become the year with the most gun sales ever.  In August the pace slowed slightly, while breaking the previous record from last year.  The 2016 NICS checks are far ahead of those for 2015, the previous record holder.

There are 15 years where we can compare the NICS background checks to the actual addition to the private firearms stock, as reported to the ATF.  During that period there have been about .6 firearms added for each NICS check.

We will not know exactly how many guns have been added to the private stock in 2016 until late January, 2018.  The numbers will not be reported to the ATF until the end of 2016. The ATF is required by law to hold them from public view for a year, to prevent proprietary information from being released.

It is easy to see how one manufacturer would like to know exactly how many guns of certain models and calibers their competitors are selling.

Given the NICS numbers, if there are 30 million checks done in 2016, there will probably be 18 million guns added to the private stock.  That would increase the private stock to 406 million private firearms in the United States.

The private firearm stock in the United States will have increased by nearly 100 million firearms, or 30%, during the two terms of the Barack Obama presidency.

That would be a remarkable achievement.

It is not clear why the number of NICS check slowed a little in August.  It is still a record.

Many indicators show a soaring and  diverse level of gun ownership.  Carry permits are burgeoning, approaching 15 million and more.  Gun ownership among women and minorities is at an all time high.

A recent Pew poll showed 44% of households to have a gun, about the same as existed 50 years ago.  Polls have been notoriously unreliable indicators of the number of guns in the country.  Gun haters have taken to claiming that the number of gun owners are dropping.  Gun ownership polls tend to show less owners when there is a push for more restrictions on guns.  The less people trust the government about guns, the less likely they are to answer a poll by saying they own them.

Who would have thought that the presidency of Barack Obama would be such a boon to American gun manufacturers?